Victor Albisu, parent of both a 2nd grade and kindergarten student at FHES, was recently featured on the Food Network!   The show is called Beat Bobby Flay. Concept being that Chefs go up again Bobby Flay, who is the original American Iron Chef, and see if they can beat him with dishes that a judging panel makes a final decision on.

Here is the link that shows the next airings for the episode, which is this weekend:

It was a really fun episode and Mr. Albisu ended up beating Bobby Flay!   He’s only been beat 3 times including this one. 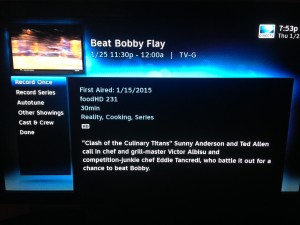